Located in the far north-west of Florida on the Gulf Coast close to the border with Alabama, Pensacola’s airport had seen little growth between 2008 and 2016. However, between 2016 and 2019 traffic grew by 39% from 1.6 million passengers to just over 2.2 million. Several airlines contributed to this growth, most significantly American, which overtook Delta during that period to become the leading carrier at the airport with 34% of seats to Delta’s 31%.

The other carriers in 2019 were Southwest (15%), United (11%), Silver Airways (4%) and Frontier (4%). The leading destination was Atlanta with more than twice as many seats as the next busiest route to Dallas/Fort Worth. New routes in 2019 were Fort Lauderdale (served by Silver Airways) and New York EWR (with United).

In 2020 passenger numbers fell by 47%. Despite this the airport still welcomed new services to Baltimore/Washington with Southwest, Muscle Shoals with Boutique Air (launched 15 December) and Washington IAD with United. This year has already seen the launch of service to Atlanta with Southwest, with American adding New York LGA in June, and United adding Cincinnati, Cleveland, Milwaukee and Pittsburgh in late May. June will also see the arrival of Spirit Airlines, launching service on seven routes; Austin, Columbus, Dallas/Fort Worth, Indianapolis, Kansas City, Louisville and St. Louis. As a result, Pensacola will serve 11 more destinations non-stop this summer, than it did in the summer of 2019. 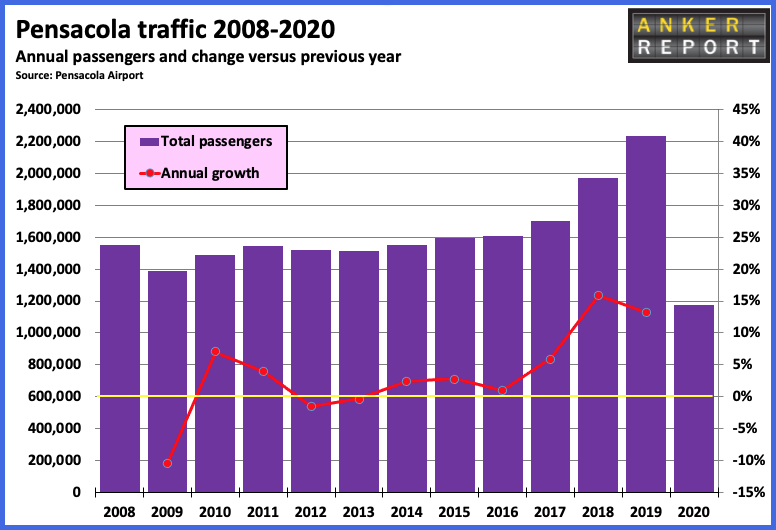