Canadian air traffic down over 80% during pandemic; recovery not likely to start before June as Flair, PAL and WestJet plan new routes

Canada’s air travel market has been much slower to recover than those in either Mexico or the US. Passenger data from the country’s eight biggest airports (which account for around 75% of traffic across all Canadian airports) reveals that last summer demand peaked at between 10% and 20% of the demand recorded in 2019. Calgary was the best performing airport relative to 2019 with demand being less than 80% down between August and November.

Looking at Canada’s two leading airlines, Air Canada reported 1.63 million passengers (down 86.5%) in 2020 Q4 across a fleet of over 300 aircraft, at a load factor of just 40.1%. Since being acquired by private equity firm Onex Corporation in late 2019, WestJet no longer publicly publishes regular passenger statistics.

2021 recovery may start in June

The early signs for 2021 suggest that the market is going to get worse again before it recovers, hopefully starting in late Q2. Porter Airlines, based out of Toronto’s downtown airport, has been grounded since last March, but recently announced plans to start operating again from 21 June. When it does, it may soon face competition from newcomer Connect Airlines, which plans to begin international operations to the US from the airport starting in October.

Elsewhere, Flair Airlines has announced a range of new routes starting this summer as the ULCC plans to ramp up its fleet with additional 737-800s, while PAL Airlines is looking to expand its operations further on regional routes in Eastern Canada. WestJet also recently announced 11 new domestic routes all starting in late June. Meanwhile, the planned merger of Air Canada and Air Transat has been called off, primarily, it seems, because of the EU’s concerns about reduced competition between Europe and Canada. 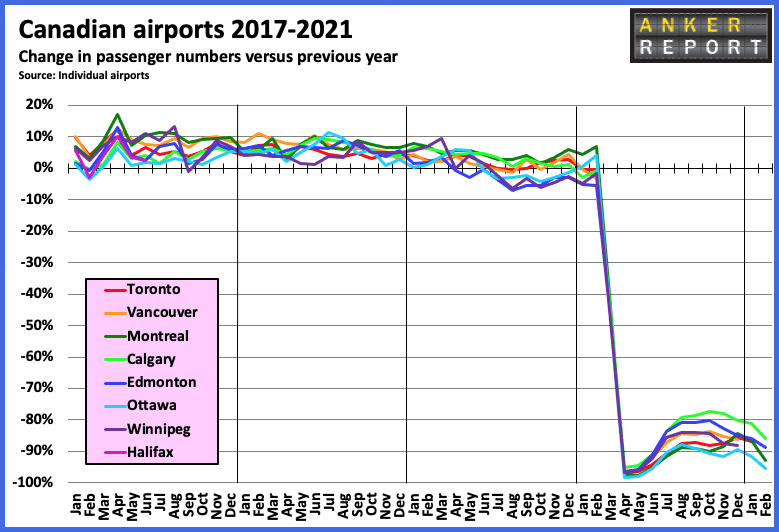