During the very challenging second year of the pandemic, 2021, Athens International Airport handled over 12 million passengers exceeding the respective 2020 levels by 52.8%, but lagging behind by 51.7% compared to 2019.

Traffic remained at low levels in the 1st half of the year, due to ongoing travel restrictions and COVID-19 waves peaking unsynchronized in different markets.

Greece eased entry requirements in June 2021, with traffic returning in significant numbers from major International markets. Traffic recovery in November 2021 reached 73%, with almost 3 in every 4 passengers Athens had in November 2019, returning.

Unfortunately, the Omicron variant emerged around that time and especially in Europe, Athens core market, with traffic falling in December and early 2022 months. From a very low 55% to 2019 traffic recovery in January 2022, Q1-2022 ended with traffic returning at 64% of 2019 level, while recovery rate improved further in April and May reaching 84% and 90% respectively. .

Rebuilding the Network and beyond

Summer 2022 looks even more promising with 39 NEW routes, some of them having already started and others just starting, including6 NEW destinations and 6 new airlines, all in all paving the way for a strong Summer Season ahead. New destinations include Bilbao with services offered by Volotea and Aegean, Birmingham with Jet2.com, Boston with Delta, Florence with Aegean, , Nis with Air Serbia and Turin with Aegean. Air Albania, Condor, BA Euroflyer, Flyr, Jet2.com and TUS Airways will offer services to Athens for the first time.

Moreover, Ethiopian Airlines is planning to resume operations between Athens and Addis Ababa from the end of June onwards, offering 3 weekly frequencies, following a short 4 month break. In addition to above new developments, a large number of existing services will benefit by increased frequencies and larger aircraft types, boosting available capacity in the Athens market closer to pre-pandemic levels. 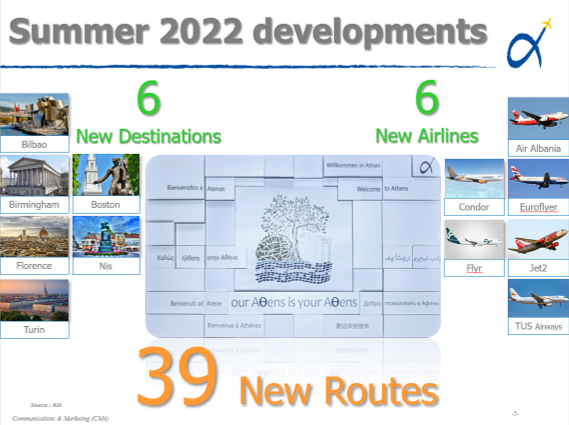 At the same time, Athens International Airport remained committed to substantially support all airlines operating to/from Athens at the extent possible, especially during such difficult times, aiming at creating a favourable environment within which airlines will be able to maintain and further increase their operations to/from Athens. To this effect, Athens International Airport extended throughout 2021, the very successful and widely acknowledged “Restart Incentive”, introduced in Summer 2020, offering significant discounts in Landing and Parking charges to all airlines operating International, scheduled passenger services to/from Athens. The scheme was further extended up to March 2022, to offer the same support during the Winter season.

In addition to the Restart Incentive’s  scheme, the well-known developmental incentives, that Athens is traditionally offering, remained available, while enhanced Marketing Support was provided, benefiting not only airlines establishing new services but all operating airlines at the extent possible.

We wish our partners a wonderful “Athenian” season ahead and we remain totally committed to support our operating carriers with their developmental plans to/ from Athens.