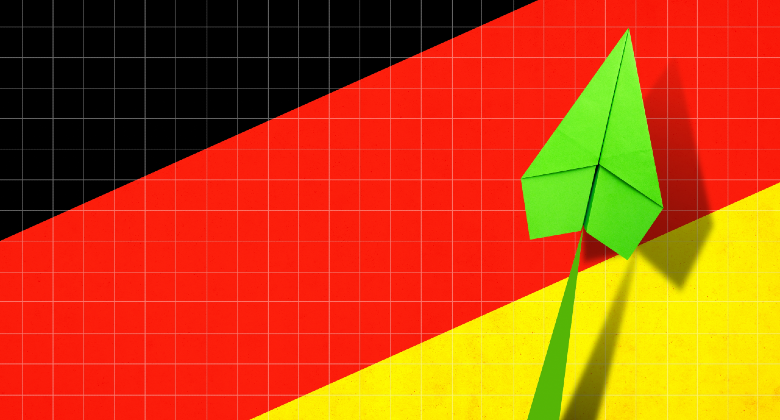 Analysis of airport passenger data for April reveals that among Europe’s biggest air travel markets, Germany has been the slowest to recover. Passenger numbers were down 35% across German airports in April, compared with 27% in Turkey, 26% in the UK, 16% in Italy and just 12% in Spain. As it takes a while for passenger statistics to be published, we have analysed Cirium schedule data for June 2022 and compared it with June 2019.

Germany’s recovery is also at least 10 percentage points worse than that seen by the other major European markets; the UK and France are at 87%, Turkey at 92%, Spain at 93% and Italy at 95%. Among the top 15 country markets, only Greece is showing growth versus 2019. 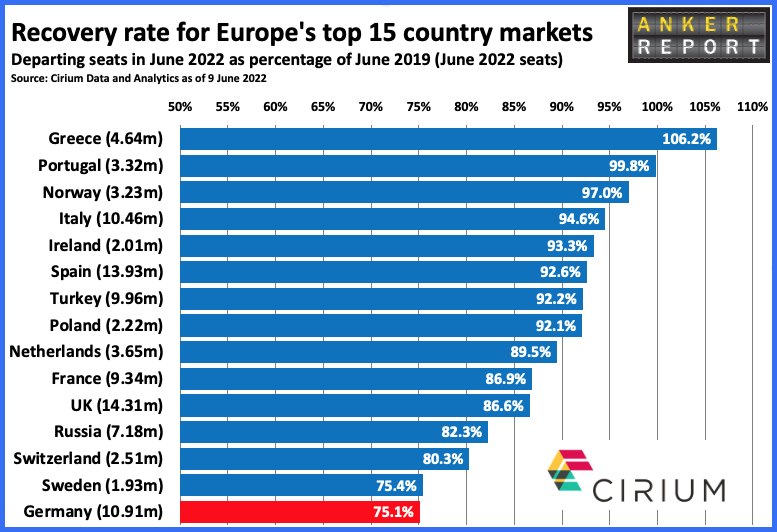 Looking at Germany’s top 15 airports reveals a wide range of recovery rates. Germany’s two busiest airports (shown in red) at Frankfurt (77%) and Munich (74%) are just either side of the average. Despite all air services in Berlin now being concentrated at the new Berlin airport, this has not helped the city’s recovery rate. It lags at just 62%, the second worst among the country’s top 15 airports, beaten only by Leipzig (55%).

There is better news among some of Germany’s smaller regional airports, with four of the top 15 reporting capacity growth in June compared with 2019. Memmingen leads the way with 24% seat growth, followed by Frankfurt HHN (17%) and Dortmund (13%). Ryanair and Wizz Air are the drivers of growth at these airports. 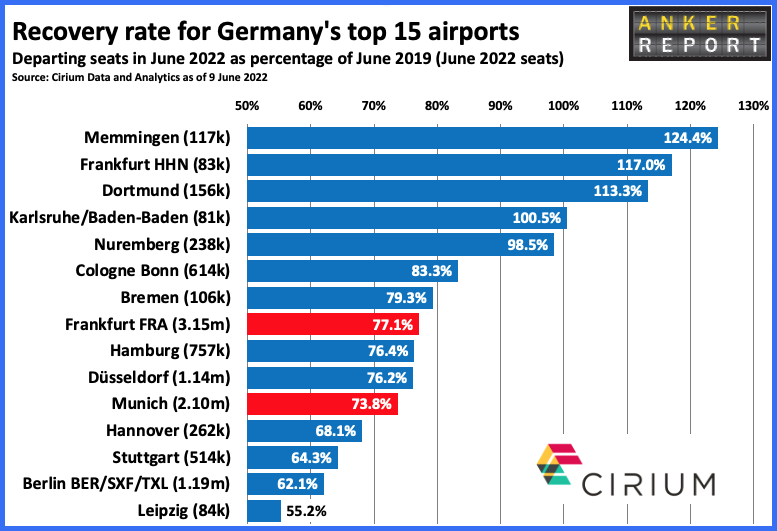 easyJet and Ryanair recovery in Germany below Lufthansa and Eurowings

Not surprisingly, as the dominant carriers in the German market, Lufthansa and its lower-cost subsidiary Eurowings (both shown in red) both have recovery rates around the national average. What is unusual in Germany is that the recovery rates for Europe’s two biggest (U)LCCs, Ryanair (65%) and easyJet (just 39%), are below that of the national average. Even fast-growing Wizz Air is only offering the same capacity in Germany as it did three years ago.

For airlines in the top 15 that are growing in Germany you have to look for carriers with a Turkish link. Turkish Airlines itself (+11%), SunExpress (+18%), Pegasus Airlines (+28%) and above all Corendon Airlines (+163%) have found ways to grow their presence in Germany. However, German leisure carriers are not seeing such robust growth with Condor (-17%) and TUI fly Deutschland (-39%) not yet matching their 2019 capacities. 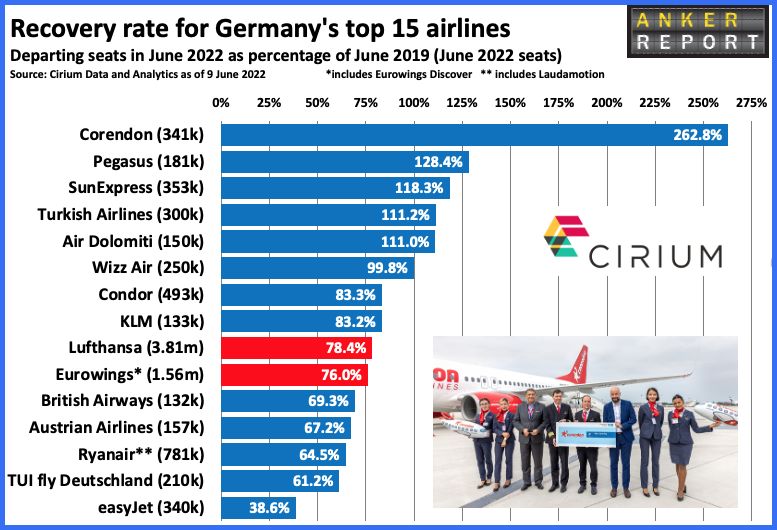 Domestic market recovery only just over 50% in June

The two biggest leisure markets of Spain and Turkey (shown in red), are at 88% and 108% respectively, confirming the popularity of Turkey as a popular holiday destination. This summer that is helped by the economic situation in Turkey where the devaluation of the local currency means that foreign visitors are finding the country excellent value for money.

However, the stand out market is Greece, where capacity is up 17% compared with June 2019. Condor, Corendon, Eurowings, Lufthansa and SundAir have all grown their Greek capacity in June. Half of the extra 104,000 monthly seats which have generated the 17% growth, have come at Heraklion and Rhodes, the two most popular Greek destinations from Germany. However, in terms of percentage growth the winners in Greece this June are Santorini (+134%), Chania (+84%), Samos (+80%), Mykonos (+63%), Zakynthos (+49%) and Skiathos (+42%). 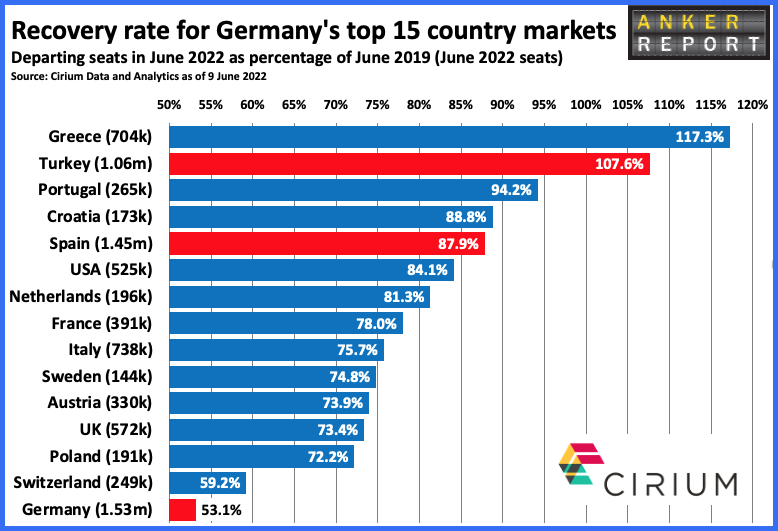