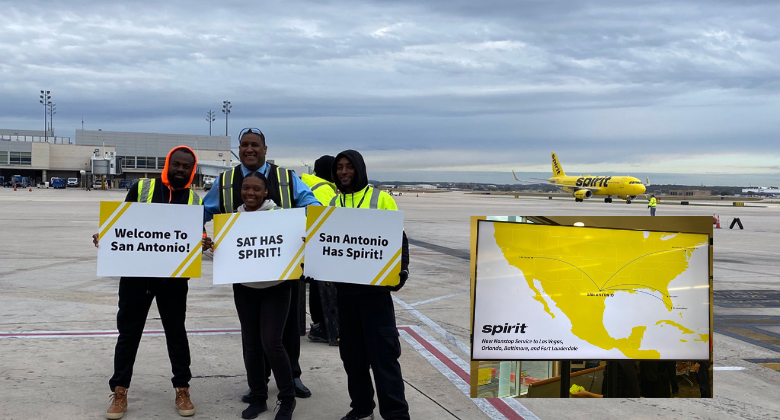 San Antonio in Texas is the latest US airport to welcome the bright yellow aircraft of Spirit (IATA code NK). Technically, Spirit has served San Antonio before, way back between April 2008 and March 2009 when it offered a single route to Fort Lauderdale. On Thursday 17 November the ULCC launched its first new routes in 14 years at the airport when it introduced daily service from Las Vegas and Orlando MCO. Two further routes to Baltimore/Washington and Fort Lauderdale are set to start on 8 March 2023.

Pre-pandemic, San Antonio served just over 10 million passengers annually. The latest passenger statistics for September 2022 show that demand is down just 2.3% versus 2019. This is an improvement from August when traffic levels were still 7.0% lower than in 2019.

Last year saw Breeze and JetBlue serve the airport for the first time. With the arrival of Spirit, San Antonio is now home to 14 scheduled airlines, 11 US carriers and three from Mexico (Aeromexico, Vivaaerobus and Volaris). Southwest remains the biggest carrier at the airport, with almost twice as many seats offered this year than its nearest rival American. United has passed Delta to be the third busiest carrier at the airport.