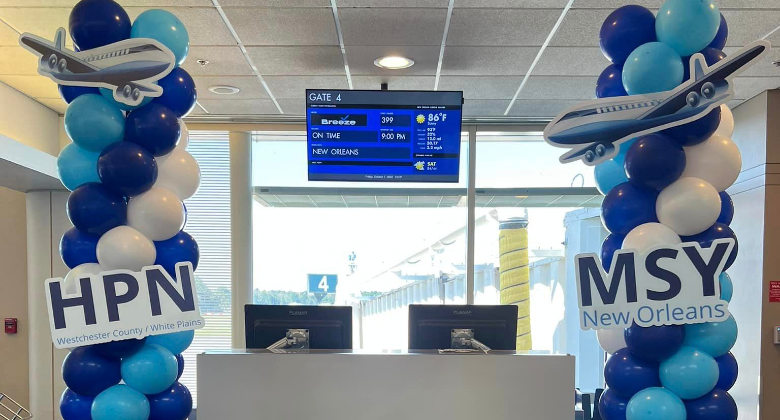 Breeze (IATA code MX) chose Friday 7 October as the launch date for two new routes to Savannah in Georgia. It now serves the airport 2-weekly (Mondays and Fridays) from New Orleans and White Plains/Westchester. Neither route is served by any other carrier. The airline will use its E190s on both new connections.

The inaugural flights for both routes were operated by the same aircraft, registration N115BZ. It started in New Orleans, flew to Savannah, then on to White Plains before returning to Savannah and then back to New Orleans.

Tom Doxey, President at Breeze Airways, said: “With these two new destinations from Savannah we see a lot of potential. Adding service to underserved markets like Savannah fits our business model and makes travel easier for our Guests in the local community. We are excited to see Breeze’s operations grow in Savannah.”

Greg Kelly, Executive Director, Savannah Airport Commission, added: “We have been trying to get air service to New Orleans for many years and now Breeze has given us an opportunity to show that linking SAV and MSY will be a win for our communities and for Breeze. Additionally, we appreciate Breeze connecting us with Westchester Airport which further strengthens our connections to the New York/Connecticut corridor. This area continues to be a strong market for us.”

Breeze also serves Hartford in Connecticut from Savannah, a route it launched back on 4 June. It also operates 2-weekly this winter. However, another route between Savannah and Columbus in Ohio, also launched on 4 June, has proven less viable. According to Cirium schedule data it operated just 18 times with the last flight on 3 September, as confirmed by flightradar24.com.

Savannah/Hilton Head International Airport (IATA code SAV), which is close to downtown Savannah, welcomed three million passengers in 2019 and had seen traffic virtually double since 2013. According to Cirium data, weekly seat capacity in October 2022 is 14% higher than in October 2019. This is primarily due to the arrival of Southwest Airlines and the five routes they launched in March 2021.

The airport is not to be confused with Hilton Head Island Airport (IATA code HHH) in South Carolina, which is actually on Hilton Head Island. That airport handled around 220,000 passengers in 2019. Weekly capacity at this airport is up 21% versus October 2019 thanks to the addition of new services by United (from New York EWR and Washington IAD) and American (from Washington DCA).