Despite the pandemic, it was a busy year for airline route planners working for airlines in the US. As traffic recovered more quickly (compared with Europe) to reach around 80% of 2019 demand by the end of the year, US carriers in particular used the opportunity to try out many new routes. The ANKER Report has identified 1,252 new routes launched by airlines last year involving airports in North America (comprising Canada, Mexico and the US). In summary:

Analysis of when the new routes were launched reveals that June was the busiest month with airlines starting 263 new services that month. Then came May with 188 and November with 180. Because fewer US airports are slot controlled (compared with Europe) route launches tend to be more often associated with periods just before Federal holidays, rather than the start of the ‘summer’ and ‘winter’ seasons. 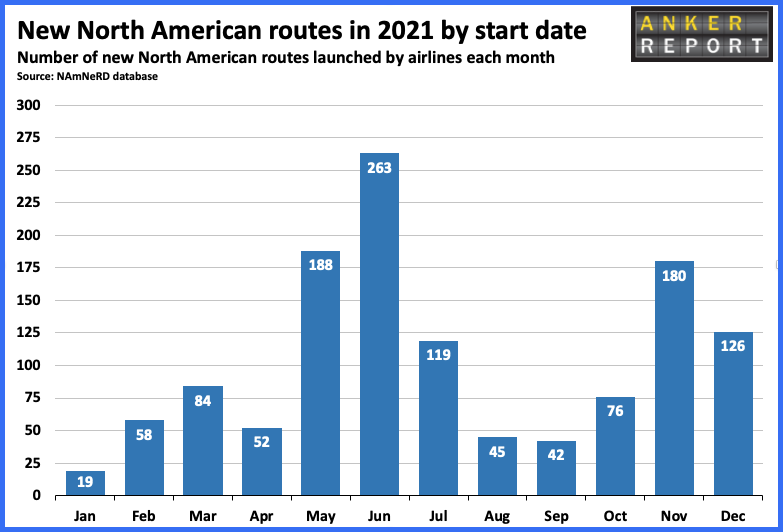 Celebrating its 50th anniversary in 2021, Southwest launched over 180 new routes last year, more than any other airline in North America. This included starting service to 14 new airports in 2021, including major hubs such as Chicago ORD and Houston IAH as well as much smaller airports such as Bellingham and Syracuse. 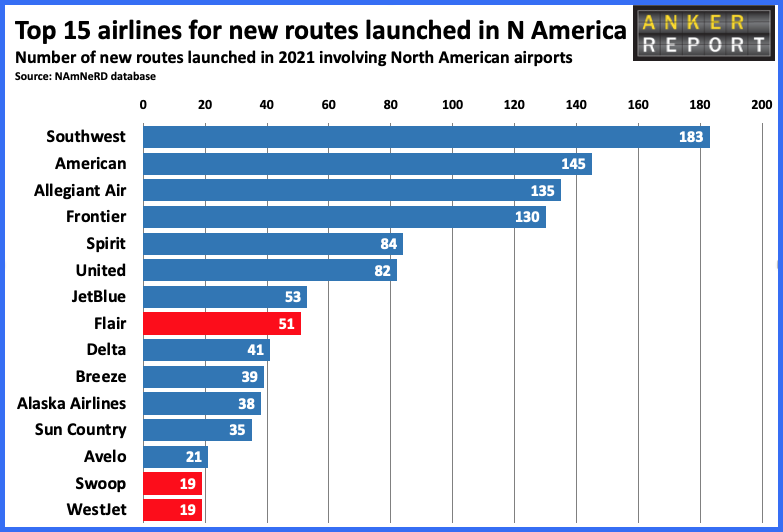 Legacy carrier American ranked second with almost 150 new routes, followed by the three fastest-growing US carriers, Allegiant Air, Frontier and Spirit. With their focus on leisure markets, these carriers looked to find new markets that would appeal to passengers looking to get away for a relaxing break during the pandemic. Among the top 15 airlines for new routes were two US start-ups, Avelo and Breeze, and three Canadian carriers (shown in red).

For new route celebrations the place to be last year was Florida. Airlines launched over 350 routes involving airports in the state, well ahead of California (216 new routes) and Texas (166 new routes). Among the top 15 states (or provinces in the case of Canada), two were in Canada (shown in red). Given the relative size of the air travel markets in each state/province, the appearance of Montana (ranked 14th) is noteworthy. The state proved appealing as a destination that would attract customers looking to get away from congested cities. 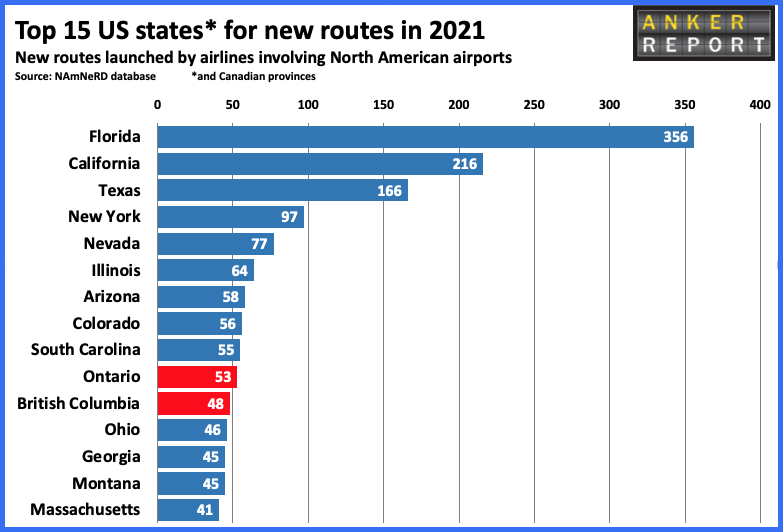 At an airport level, there was also a clear winner, with Miami welcoming over 80 new airline services. The airport celebrated multiple new route launches from American (15 new routes), Frontier (21), Southwest (12) and Spirit (28). However, it also attracted new long-haul services from foreign carriers including Air Transat, Emirates and Finnair. Two other airports in Florida also made the top 15; Orlando MCO was second with 62 new routes while Tampa ranked ninth. New York and Texas were the only other states to have more than one airport in the top 15 with JFK ranked 8th and La Guardia 15th, and Austin 4th and Dallas/Fort Worth 12th. 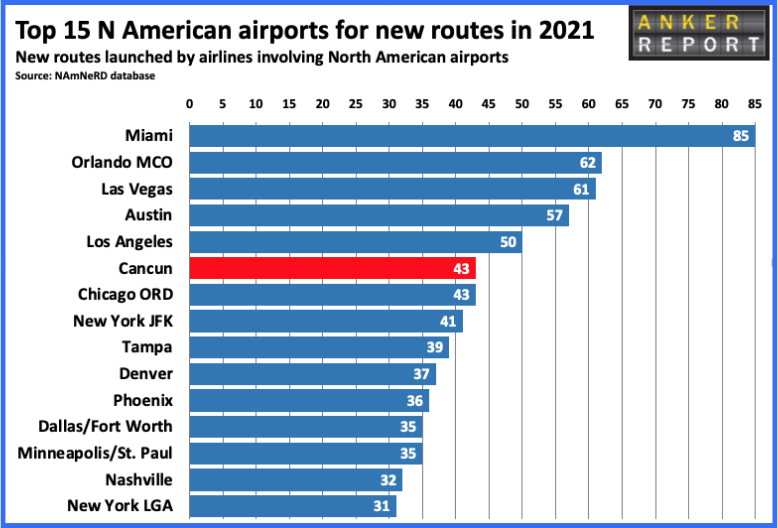 For details on all these 1,252 new routes, including date of launch, weekly frequency, sector length and competitor information, download the North American New Route Database (NAmNeRD) file available on the homepage of this website.