Sarasota/Bradenton is fastest-growing US airport in April; Florida’s airports lead the way as eight of top 12 airports are on east coast

Recent new route announcements from US carriers have made it clear that underserved destinations along America’s east coast are proving particularly popular with network planners. The ANKER Report has analysed weekly schedule data for the last week of April 2021 to see which airports have seen the biggest increase (in absolute terms rather than percentage terms) in weekly departures compared with April 2019.

Leading the way, with over 140 extra weekly flights compared with two years ago, is Sarasota/Bradenton, located on Florida’s west coast. Around half of Sarasota/ Bradenton’s extra flights have come as a result of the launch earlier this year (starting on 14 February) of flights by Southwest from nine airports. Five of these new routes are being served daily with Baltimore/ Washington (3-daily), Chicago MDW (2-daily) and Nashville (2-daily) having multiple-daily flights. United and American have also both added between 20 and 30 weekly flights, with United having launched routes to Denver, Washington IAD and Houston IAH, and American having added Chicago ORD service. Delta and Sun Country have both introduced Minneapolis/St. Paul flights, while Allegiant now has service from Belleville/St. Louis, Boston, Flint and Louisville.

Key West, which is one of the islands in the very south of Florida, has benefitted from expansion by American, Delta and United, and the arrival of JetBlue. Frequency has been increased on several existing services but there have also been new services to Boston (JetBlue), Dallas/ Fort Worth (American), Houston IAH (United), New York JFK (JetBlue), Orlando MCO (American), Tampa (American) and Washington IAD (United).

Panama City, or Northwest Florida Beaches International Airport as it is officially known, only opened for commercial service in 2010. Its recent growth has been evenly shared between its four carriers; American, Delta, Southwest and United. American has added a new route to Washington DCA, Southwest has introduced service from Atlanta, Chicago MDW, Denver and Kansas City, while United Airlines has added Chicago ORD, Denver and Washington IAD flights since April 2019.

Hilton Head Island set to grow even more in May

Further up the coast from Florida two airports in South Carolina have also seen significant growth. Myrtle Beach has seen over 50 additional departures with Spirit and American leading the way. Most of this has been through additional frequencies on existing routes. However, American and Delta have added daily flights from Dallas/Fort Worth (back in May 2019) and New York LGA (back in June 2019) respectively.

Elsewhere in the US, Colorado Springs has seen Southwest add five new routes (Chicago MDW, Dallas DAL, Denver, Las Vegas and Phoenix) in March, all with at least daily service. Quincy (IATA code UIN) in Illinois has seen Cape Air add service to St. Louis and replace United on the Chicago ORD route. While flights are up over 200%, capacity is actually down 44% compared with April 2019. Meanwhile, Martha’s Vineyard (IATA code MVY) which is only served by Cape Air, has seen new routes added to Nantucket and New York JFK. 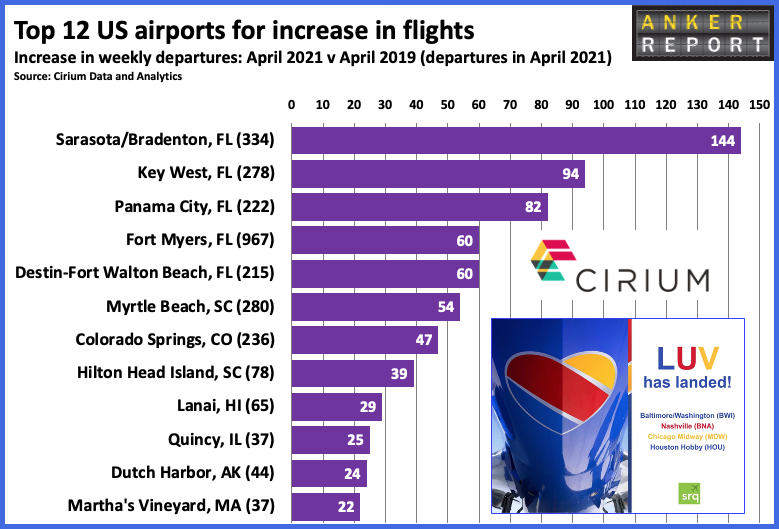