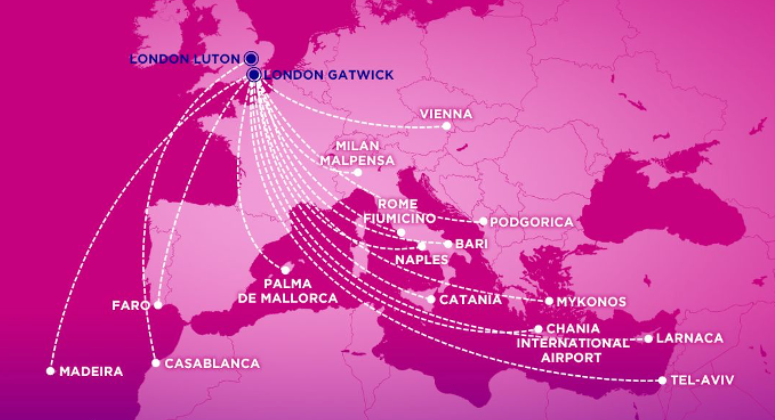 Well that was quick. Having announced on 22 December that it acquired enough slots from Norwegian to justify basing four additional A321neos at Gatwick next summer, the following day Wizz Air announced the 14 new routes that it would be adding from the start of the summer season. Details of the new routes, launch dates, weekly frequency and likely competition next summer are as follows:

easyJet is most impacted as Wizz Air will compete on 12 of its routes, while British Airways will face additional competition on six of its recently announced routes from Gatwick in S22. Furthermore, TUI Airways will likely be competing directly on five routes and Vueling on one. Naples is not strictly a new destination as it operated briefly at the end of 2020 before the UK imposed draconian travel restrictions.

Of the 14 new destinations, five are in Italy, two are in Greece, two are in Portugal with one each in Austria, Cyprus, Israel, Montenegro and Spain. Many of these destinations have also been served by Wizz Air from its biggest base at Luton. The airline’s on-line booking tool indicates that a number of these Luton routes are, in effect, moving to Gatwick.

Podgorica, Tel Aviv and Vienna are new routes for Gatwick in S22

Only three of Wizz Air’s new routes (Podgorica, Tel Aviv and Vienna) are currently set to face no competition from Gatwick next summer. The only service from the UK to Podgorica this summer was offered by Ryanair from London STN with a 2-weekly service. From Gatwick, the route was last served by TUI Airways in S18 and S19 and before that by Montenegro Airlines between October 2009 and September 2013, according to Cirium data.

easyJet currently only serves Tel Aviv from Gatwick during the winter season, though it does serve the Israeli airport year-round from Luton. It will be interesting to see if the airline decides to go year-round at Gatwick as well in light of Wizz Air’s arrival. easyJet actually launched its Gatwick to Tel Aviv service in S14 and operated flights during the summer season in both 2015 and 2016 before making it a winter only route.

The Vienna route has had an interesting history at Gatwick. easyJet launched service on the route back in April 2009 and operated year-round flights until the pandemic struck. However, the route has not been resumed on a regular basis since then. British Airways launched service on the route in September 2015, initially on a year-round basis, before operating the route only in winter in 2017, 2018 and 2019. Looking further back the route was also served by Aer Lingus for a year between April 2009 and March 2010 during that airline’s short-lived experiment of having a base at Gatwick. More recently, IAG carrier LEVEL served the market between July 2018 and August 2019.

Bucharest was first Gatwick route in 2016

Wizz Air first began serving Gatwick back in June 2016 from its base in Bucharest. This remained the airline’s only route from London’s second busiest airport until Budapest, Cluj-Napoca and Gdansk were added in 2019. Krakow was added on 23 February 2020 and was one of the last routes to launch in Europe before COVID hit. Sofia service was then added in June 2020. The fourth quarter of 2020 saw the launch of additional flights to Athens, Fuerteventura, Lanzarote, Malta, Naples and Tenerife TFS. However, some of these services barely operated due to the UK’s travel restrictions which became severe at the end of 2020.

Eight other Gatwick routes also on sale for S22

In addition to the 14 new routes, Wizz Air will also be serving eight other destinations in S22; Athens, Bucharest, Budapest, Gdansk, Krakow, Malaga, Sofia and Tenerife TFS. These routes are all currently bookable for next summer on the airline’s website. In addition, there are still a few flights on sale until mid-January to Lanzarote and Malta.

Given Wizz Air’s extremely proactive approach to network planning, it is quite likely that there will be changes to the airline’s Gatwick operation between now and the end of March; maybe additional routes, reduced frequencies or even increased frequencies. A lot will depend on how advance bookings develop in the coming weeks.